Fibroids are the most common abnormality that can occur in any woman’s womb. About 1 in 3 women will develop fibroids during their lifetime most likely at the age of 22-55 years, i.e. mainly during the woman’s reproductive age.

What are the fibroids?

The term “fibroids” describes the benign uterine build-ups created by the uterine muscle cells. They are diagnosed in approximately 25% of women. Heredity is an important factor that affects their appearance, but hormones, especially estrogens, are responsible for their size increase. The fibroids are classified according to their position in the uterus: 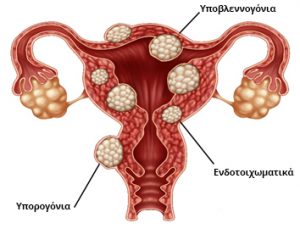 Advantages of the treatment technique for fibroids:

Dr. Odysseus Savvouras has co-authored the third issue of the book “Robotic Surgery” with the pioneer in video-laparoscopy, Carman Nezhat. 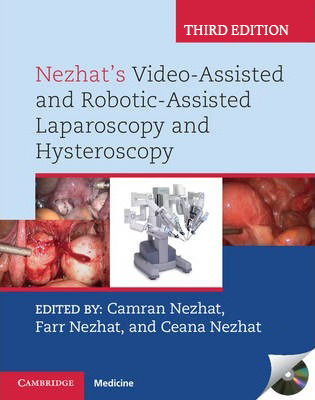 Fibroids – What are the Symptoms?

The fibroids may have no symptoms and may be a random finding in a simple gynecological ultrasound examination. However, in some cases, fibroids may cause:

The above symptoms are the main symptoms what will lead a woman to a gynecologist.

If the fibroids are submucosal (i.e. in the endometrium) or too big, YES we do care, because they can cause infertility, bleeding during pregnancy or even miscarriage or premature birth. Therefore, if we know that we have fibroids before a woman gets pregnant, it is advisable to talk to the gynecologist about whether or not they should be removed, so that there will be no complications during pregnancy or childbirth.

What about fibroids during pregnancy?

During pregnancy the fibroids are enlarged, due to the increase in estrogen levels. Depending on the location they are in, they may or may not cause problems.

We often monitor them throughout the pregnancy with an ultrasound examination. It is rarely necessary to have a fibroids surgically removed during pregnancy. At the end of childbirth they decrease in size; however, their size is finally estimated 6 months after birth. In addition, if there are large fibroids near the cervix during pregnancy, their location and size should be assessed because a caesarean section may be required.

The fibroids after menopause are not absorbed by the body, as it was believed in the past. They simply stop growing as there are no elevated levels of hormones in the woman’s body. Sometimes some fibroids may shrink in size, but they do NOT disappear.

In fact, if there are submucosal fibroids, i.e. in contact with the endometrium, then due to atrophy of the endometrium the incidence of bleeding is increased.

In menopause, if they do not cause any of the aforementioned symptoms, we can simply monitor them, since they are considered a benign condition. Only if they get suddenly enlarged or any of the above symptoms are presented, we should remove them.

The incidence of cancer due to fibroids is only 0.1%.

Thus, if they do not change in size, composition or present increased vascularity over time, we do not remove them, since the incidence of cancer is very small.

The size of the fibroids ranges from a few millimeters to tens of centimeters. However, the symptoms depend on the location of the fibroids in the uterus and not just the size. A large fibroid may be located on the outer surface of the uterus and be asymptomatic, but there may be a small fibroid in the endometrium of a few millimeters, causing bleeding or infertility.

In most cases they are detected at random during a routine gynecological ultrasound, intravaginal (recommended) or intraabdominal – the most common and easy examination.

The hydro-ultrasound is a new method that is applied during the intravaginal ultrasound examination. A fluid is injected into the endometrial cavity through a small catheter. This fluid makes it easier to detect polyps, fibroids or other anatomical disorders of the endometrium. The method is painless and provides immediate results. It can assist in the diagnose of fibromyalgia or highlight the presence of a polyp in the endometrial cavity

How are fibroids treated?

When fibroids require treatment, they are immediately treated with resection. The removal of the fibroids is mainly performed endoscopically, i.e. laparoscopic, robotic or hysteroscopic resection, in case of fibroids projecting inside the uterus, i.e. submucosal fibroids.

Endoscopic techniques – laparoscopic or robotic, in gynecology are increasingly gaining ground and their application in the removal of fibroids prevails over other techniques, e.g. open surgery.

The advantages of endoscopic surgery are:

In addition, fibroids can be removed robotically, even in the most inaccessible parts of the uterus with greater ease and in a short surgical time. Patients undergoing laparoscopy or robotic surgery are hospitalized for only 1 day after surgery and they are immediately mobilized, within 6 hours after surgery!

The method of choice today for the removal of fibroids is laparoscopy.

The appropriate method of treatment should be chosen by an experienced and specialized gynecologist, who will be thoroughly informed on the patient’s medical history.

The Obstetrician – Surgeon – Gynecologist Odysseus Savvouras with many years of experience in the field of gynecology, with hundreds of surgical operations in his biography and training courses in America on the minimally invasive surgical laparoscopy and robotic surgery at Stanford University, taught by Nezhat Camran, the father of video-laparoscopy.

The gynecologist Savvouras Odysseas is the most suitable for whatever concerns you and can successfully and safely handle any type of endoscopic technique – laparoscopy, robotic surgery or hysteroscopy for the investigation and removal of fibroids.